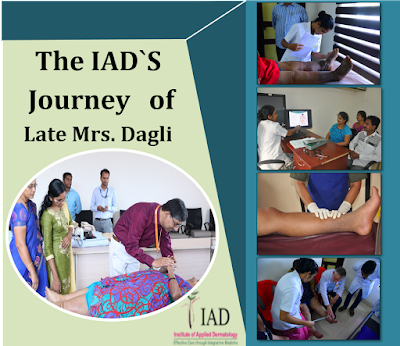 The Late Mrs. Dagli is a name etched onto IAD's memories. She was a kind-hearted, affluent 52 years old lady from Mumbai. She lived with her husband, a diamond merchant, and two well-settled daughters. She had lymphedema of both the limbs, which were also infested by maggots(worms). She sought treatment from many hospitals, big and small, including seven-star hospitals in Mumbai, but no one was able to offer her any solace. She was haunted by recurring red legs and cellulitis. She was informed about IAD by a famous dermato-surgeon in Mumbai. She came here and was under our care from April 2011.

She also suffered from hypertension, hypothyroidism, renal failure, and obesity, in addition to bilateral oozy lymphedema. Dr. Jayadev, a physician in one of the hospitals in Kasaragod, was treating her comorbidities while she was on treatment in IAD. As the saying goes, the place does not matter; it is the doctor who matters to the patient. It was true in Mrs. Dagli`s case. She was fond of Dr. Narahari and Dr. Jayadev. Being treated in a 7-star hospital, she knew who would console her the most and give confidence in her life. By this time her husband left for heavenly abode, leaving behind the entire diamond business in Dagli`s name. Despite being a merchant of diamonds, her hospital bill in IAD was half paid!

Mrs. Dagli never followed treatment protocols, nor did she return for follow-ups. However, she did maintain contact with the entire team of IAD and Dr. Jayadev and would call them even for minor problems. Burdened by the frequency and the menial nature of her calls, the doctors stopped answering her calls, while on work.

One night in July 2015, she called Dr.Narahari and requested him to take her call and also to convince Dr. Jaydev to answer the phone. She was seriously ill with fever and redness of the limbs. She badly wanted to reach IAD. Little did she know that this would be her last visit to IAD. During her flight, she took Tab Aceclofenac(pain killer), despite Dr. Narahari having warned her not to do so as it injures the kidney and liver. She was accompanied by her assistant. The day after she reached, by afternoon, she suddenly developed breathing difficulty and loss of appetite while in IAD.  She was diagnosed to have an acute kidney injury. Dr. Narahari rushed from his clinic leaving behind the long queue in his clinic, examined her, and shifted her to Dr. Jayadev's hospital. That was on 11-07-2015, 4 years after her first visit to IAD

She was admitted to Carewell hospital under Dr. Jayadev. Team IAD visited her daily and treated her lymphoedema. She was fiercely attached to team IAD. Dr. Narahari would visit her twice a day. She would plead for him to stay for a while longer, and she would talk about all of her feelings, about her loneliness, and her disgust at all human beings have come to her solely for money. She was heartbroken at her daughters limiting themselves to greeting her. After ventilating herself she would go to sleep.

On 15-07-2015, she slipped into a coma. She was diagnosed with hepatic encephalopathy,  the liver damage caused by Aceclofenac, a rare side effect of the pain killer. Dr. Jayadev spoke to her daughters and advised them to come to Kasaragod since he sensed her end nearing.  One week after hospitalization, on the morning of the 21st, she succumbed. She wanted relief from painful red legs of lymphedema, but she ended her life due to a small drug that she took, just to reach IAD.

Sajith, our administrative officer, worked very hard to transport the dead body to Mumbai. He had to find an ambulance ready to transport her to Mumbai and had to ensure that all the legal necessities were done. The ambulance driver was not ready to drive without being paid in advance. Sajith paid it from IAD, and within 24 hours, they reached Mumbai and all the rituals could be performed on time. Sajith had coordinated all things efficiently. The family was grateful, and they sent three shirts to Kasaragod; One for Sajith, one for Dr. Jayadev, and the last for Dr. Narahari. All were hesitant to wear the shirts but did so to honour her memory.

Empathy is an excellent feature in a doctor. And this was what Mrs. Dagli sought for, and found, along with the confidence instilled by team IAD. She was capable of taking treatment in corporate hospitals, but she chose IAD in her final journey, for the reason not known to us. Whatever said and done, money is needed just to live, but there is something beyond that. Patients go in search of that and are satisfied even though they are not cured of their problem. 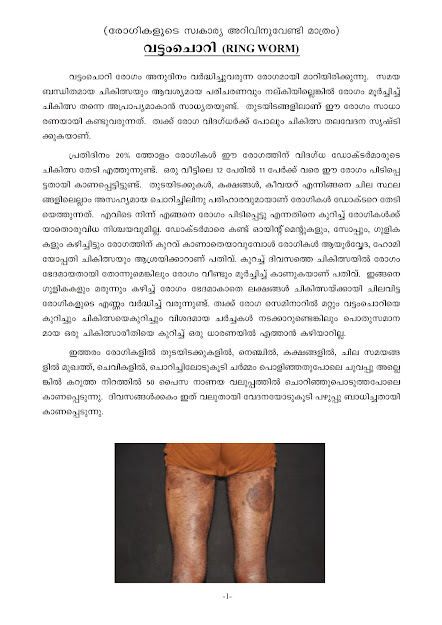 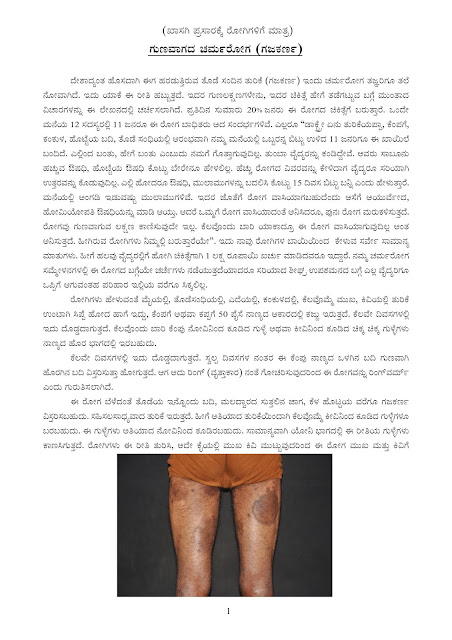 The Institute of Applied Dermatology, worlds leading lymphoedema and integrative medicine hospital was started in the year of 1999 as a charitable and not for profit venture to improve and provide effective dermatological treatment. Being sector-specific for the skin care treatment, the hospital aims at being a single point of contact for all long standing skin problems by developing and creating an integrative treatment approach.